It is early for Russian Wheat Aphid (RWA) to show up on fall seeded wheat. But while surveying winter wheat on March 29, 2006, I found light numbers of RWA on wheat still suffering from the winter. 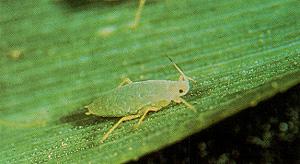 I also found that most of the RWA were parasitized by the Braconid wasp Diaeretiella rapae which is a very effective biological control against RWA and other aphids in cereal crops.

The field diagnostic is a small light green aphid with a “parrot beak” caudum. Some wheat varieties display white or yellow stripes with just one RWA on a tiller. RWA does not vector viruses but is very toxic.

Economic thresholds are usually not reached if spring temperatures allow parasitoid activity prior to RWA population increase. Several insecticides are labeled for RWA management when needed.