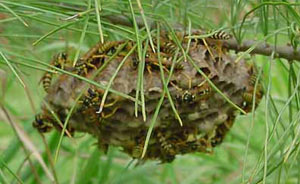 Descriptions Yellow Jackets belong to the Genus Vespula in the Wasp Family Vespidae. V. pennsylvanica (Saussure) is the most common species in the area, and the most aggressive. The common western yellow jacket species have similar behavior. The queen emerges in the early spring from her paper nest where she over wintered as an adult embryo. She mates with an emerged male and begins to lay eggs in a small paper next she constructs by herself. She will feed her larvae with prey e.g. spiders, caterpillars, etc. The white grub like larvae mature into sterile adult female workers, which assist the queen in producing more workers. The western yellow jacket builds a paper nest in the ground. Other species may be arboreal. Many people are allergic to yellow jacket venom. Workers are most aggressive on warm days in the fall as they tend to the new queens and males for next year up to hard frost. 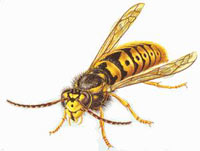 Management Putting out an Akre Trap in the spring will reduce the workers present in the fall by 22 for each queen trapped in the spring. Workers will requeen if the queen of their colony is lost during the summer, so spraying individual yellow jackets is of little value. Akre Traps are effective through the season if refreshed with the bait available where traps are sold. Large area spraying is a bad practice from an IPM point of view as it kills all arthropods. Spraying of individual colonies is hard and can be dangerous. Be sure to read and follow the label of all pesticide products.