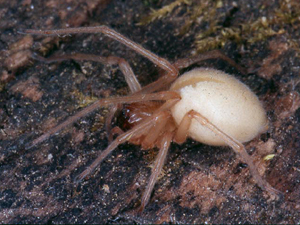 Clubionidae spiders or sac spiders are biters of humans on occasion. Both C. mildei and C. inclusum are commonly called yellow sac spiders, although they are usually not yellow! Widely distributed throughout the U.S. C. inclusum is a native species of yellow sac spider while C. mildei was introduced from Europe during the 1940s, and is fairly common in the Seattle area. C. inclusum does not naturally occur in the Puget Sound region. C. inclusum is a common spider in the Tri-State Region. They are in gardens in the warm season, and seek indoor shelter in the fall very much like the Hobo spiders.

The bite of a common sac spider (Chiracanthium spp.) can be misdiagnosed as a brown recluse spider bite. Injuries develop in a similar manner but are much less severe. Reactions, such as swelling, slow healing, and ulcerated sores around the bite site, are similar enough to be confusing. If you are bitten by a spider, ice and elevate the bite site. Seek medical attention if the symptoms persist or intensify. Physicians will often prescribe antibiotics to prevent secondary infections. Most bites will start to improve in a few hours to 2-3 days. Some people are allergic to spider venom as others are to yellow jacket or honey bee venom. 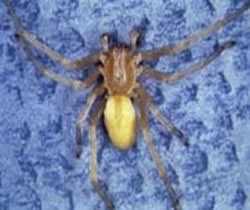 Yellow sac spider bites occur most frequently when the very defensive spider is trapped in clothing. Sac spider bites are not considered as serious as those of the brown recluse or hobo spiders. The severity of bites varies greatly. Typical symptoms of a bite include an immediate stinging sensation (like a hornet sting), followed by redness and mild swelling. Sometimes the bite will make a person mildly ill or result in a blister, which often breaks, leaving a sore that heals over a period of several weeks.

Sometimes pest control companies promote wholesale spraying for spiders. This is questionable as is spraying for Hobo spiders with short term insecticides labeled for inside the home. Rarely are people bitten by Clubionidae spiders, and they are aggressive nocturnal hunters returning to their “sac” to rest by day. They are beneficial predators and rarely bite unless disturbed. Brown Recluse Spiders are Southern and are not present in the Tri-State Region at this time.