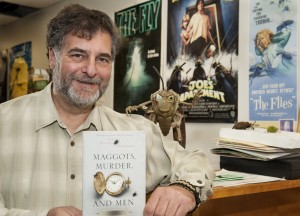 book that he assigns to his undergraduate students.

PULLMAN, WASH. – Wriggling maggots feeding on corpses are our allies, not enemies. Should you think otherwise, don’t tell that to Richard Zack – not over his dead body.

“Maggots do a lot of good for the planet. They don’t deserve the lowly reputation they have,” said Zack, an entomologist with Washington State University.

These flesh-eating creatures that get heightened attention each Halloween, “are nature’s great recyclers.  They help cleanse the earth to make room for new life,” he said. “If we look at maggots from a biological standpoint, they are very beneficial.”

So beneficial that they also help solve murders and save people’s lives.

Another surprise is that Maggots are not worms. They’re the larvae of blow flies, also called bottle flies for their wings’ shiny blue, green or copper tints. Blow flies can detect chemical changes to a body minutes after death, fly to it and start laying eggs.

“When an animal gets hit by a car, blow flies are typically the first to arrive,” said Zack.

Their eggs hatch into pulsating maggots that gorge on the animal’s dead tissues, he said, thereby speeding up the corpse’s decomposition. “Without maggots, the remains of dead animals would be all around us.”

Not only would rotting creatures litter the ground, but without maggots, more murderers would walk among us. Increasingly, these wormlike critters “help answer one of the most basic questions asked during a murder investigation: ‘When was the crime committed?’” writes forensic entomologist Zakaria Erzinclioglu in “Maggots, Murder and Men (St. Martin’s Press, 2000), a book Zack assigns to his undergraduate students.

Thanks to the popular television series, “C.S.I.,” many of Zack’s students have been exposed to maggots’ crime-solving abilities, he said.  Working to crack murders in Las Vegas, crime scene investigators examine maggots along with the finger prints and blood spray patterns.

Here’s why: As a body decomposes, insect activity occurs in a fairly precise order, with blow flies showing up before other bugs to deposit their eggs.  Once hatched, maggots undergo several predictable growth stages on the corpse. Depending on what stage of development the maggots are in, forensic specialists can turn back the clock and estimate when the person died, explained Zack. Among other things, “it’s the kind of information that can disprove weak alibis or corroborate others,” he said.

And finally, there’s maggot therapy. Doctors are rediscovering how well maggots aid in the healing of infected wounds.  In 2004, the U.S. Food and Drug Administration approved them as “medical devices” to attach to gaping lesions.

“Maggots do a good job of cleaning out bed sores, diabetic foot ulcers and gangrene-related wounds,” said Zack. “They remove the dead tissue while leaving the surrounding healthy tissue alone.”

Maggot therapy was commonly used in soldiers wounded during World War I, but faded from favor with the emergence of antibiotics, according to the book about maggots that’s read in Zack’s class. But sometimes antibiotics don’t work and surgery is too risky.  For patients in this hard-to-treat category, more doctors are saying, call in the maggots.  Laboratory-reared maggots are then pressed into the wound and covered with bandages.

Don’t worry, said Zack, the maggots are removed before they can turn into flies.

As maggots carry about their medical and recycling chores and help send murderers to jail, they’re still more likely to be cast in horror movies like “Poltergeist” (Remember the scene with the chicken drumstick on the kitchen floor?) than in ”Grey’s Anatomy” or “General Hospital.”

“Maybe one day people will view them with more appreciation,” said Zack.