Featured Image Above by Megan Asche

Faculty member, Charles V. Piper, an agrostologist, arrived in 1892, but no entomology courses were taught until 1894, after the Department of Agriculture was established. In about 1896 the Department of Botany and Zoology came into being. Piper, Department Chairman, taught many courses, including entomology. His duties included research on economic pests, as well teaching. The first B.S. in Entomology was awarded to Blanche W. (Baum) Barnard in 1905. In 1907 A. Leonard Melander joined the department as an entomologist and became chairman of the independent Department of Zoology (including entomology). The first M.S. in Entomology was awarded to Harry E. Burke in 1908.

A 1946 publication written by Harry Burke states that Jack Lee Webb was probably the first college student of forest insects in the United States – giving credit to the Washington State College for initiating Forest Entomology. Mr. Webb was a student of C. V. Piper in 1900-1901. He was then appointed Assistant Forest Expert in the Bureau of Forestry in May 1902 and relocated to the Black Hills in South Dakota.

In 1926 R. L. Webster, an entomologist, succeeded Melander as chairman. During his tenure he administered academic and research programs in Pullman and supervised the research entomologists at the various agricultural centers at Wenatchee, Mt. Vernon, Puyallup, Vancouver, and Prosser. The first Ph.D. was awarded to William D. Bedard in 1937.

In 1962 entomology became a separate department with H. S. Telford as the first chair. 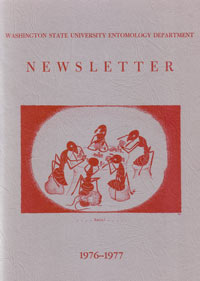 The James Entomological Museum continues to receive recognition as an outstanding entomological museum and leader among museums on the Pacific Coast. Its importance to both regional and national systematic programs has increased significantly since 1973 on the strength of consistent growth, continued financial support, and implementation of new museum programs. In terms of physical growth, the potential size of the collection increased dramatically with the acquisition of seven 48-drawer cabinets effectively relieving pressure in an otherwise crowded facility. Recruitment of much need technical staff and assistants has give new life to several museum projects and the overall program. This year the James collection is joining with other recognized systematic collections on campus and applying for membership in the Association for Systematic Collections.

Joining the museum staff this fall as assistant curator is Rich Zack, a new doctoral graduate student in the systematics program. In addition to his museum managing activities, Rich also specializes in acalyptrate flies, particularly the Ephydridae (shore flies). Already the “small fly” drawers in the museum are taking on a new appearance of orderliness. Providing assistance to Rich have been Carolyn Irwin, Karen Yust and Dave Bunton. All three are trained in entomology and bring a high degree of expertise to the more routine tasks of museum work. Several other entomology students have given freely of their time on a volunteer bases and they deserve particular mention. Edward Davis, working with flesh flies, and Peter Landolt with wasps have been most noteworthy in this regard.

Each year the museum receives an increasing number of insect specimens and other arthropods from a variety of sources. Most productive in this regard are several projects directly connected with the museum and from which a tremendous volume and diversity of material is realized. Foremost has been the Douglas fir tussock moth project which has provided at least 570,000 insects over the past two field seasons. The bulk of this material was collected with malaise traps in the Wallowa-Whitman National Forest (Blue Mountain region) of northeastern Oregon. Another project involving biting flies is being conducted throughout Washington. It likewise brings in vast amounts of both trapped and reared material representing a number of insect groups. Other departmental projects yield lesser quantities but no less valuable material. These include studies on yellow jackets (R. D. Akre); leaf cutting and alkali bees (E. C. Klostermeyer and C. A. Johansen) and forest insects (Larry Wright).

Gifts to the museum constitute another important source of materials and consist of both specimens and reference materials. Perhaps most noteworthy has been the series of donations given by Maurice James over the years. Dr. James has presented the museum with many valuable holotypes, paratypes, and exotic or rare specimens as well as large portions of his valuable personal library. Another outstanding gift received, arranged through the efforts of Dr. Richard Darsie, was a significant collection of identified Sarcophagidae (flesh flies) accumulated by the late H. Rodney Dodge. Many other individuals have made important and valuable contributions to the museum holdings.

All contributors and their donations, made since 1973, are summarized as follows:

Maurice James (Washington State University, Pullman) Over the past five years Dr. James has given the museum 5,244 insect specimens, including a number of holotypes (17), paratypes (394), numerous exotic and rare species. In addition he donated 3,380 reprints (virtually all his Nematocera and Acalyptratae Diptera holdings), 142 separate book volumes and 46 professional journal sets (many complete for the last 30 years).

Richard Darsie (Public Health Service, Center for Disease Control, Atlanta, GA) Arrangements were made by Dr. Darsie to bring 3,151 identified sarcophagid flies from the collection of H. Rodney Dodge to the museum. For his efforts we are most appreciative.

Lee Rogers (Batelle?Northwest, Richland, WA) A collection of 483 insects collected at the Hanford Atomic Energy Reserve near Richland. Essentially Diptera and Hymenoptera, most identified by specialists and including several new species.

Norman Woodley (Museum of Comparative Zoology, Harvard University, Cambridge) Mr. Woodley accumulated many Washington insects, primarily flies, during his undergraduate tenure at WSU. The collection is composed of mostly small but beautifully prepared specimens representing many unusual and rare families of Diptera which were collected through­out the state. The bulk of this material is mounted but unlabeled and fills about five Schmitt boxes and two museum drawers.

Beyond our service to the scientific community, the James Entomological Collection performs several important functions for local applied groups (University Extension Service and growers} and the community at large. The museum staff, for example, determines material on request or forwards specimens to specialists for positive identification. The number of separate determinations made by the staff over the past five years are: 1973 – 105; 1974 – 82; 1975 – 32; 1976 – 61; and 1977 (to April 1) – 5.

In addition, the museum conducts public tours of the facilities and provides oral presentations to community groups, schools and other organizations. Although the museum is essentially research oriented and lacks permanent displays or interpretive materials, the staff has conducted organized tours for individuals or groups as follows: 1973 – individuals (6 tours); 1974 – 64 (6 tours) ; 1975 – 75 (4 tours) ; 1976 – 88 (4 tours); 1977 (through March) – 2 (1 tour).

The last five years have been busy and productive for the staff of the James Entomological Collection. The museum has experienced a great deal of growth and successfully expanded its services to meet the needs of both the scientific and community spheres. At this juncture, we look forward to and anticipate further growth in both physical size and services provided, both signs of a healthy museum program.