HIPPOs, a novel strategy for improving the control of mites and insects in hops and grapes, is being developed by WSU associate professor of entomology David James. James and his research team are working on multiple field experiments with the potential to improve pest management, not only in hops and grapes, but also in a variety of crops worldwide. 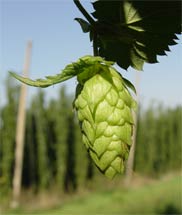 Previous studies have shown that plants, when attacked by insects and mites, respond by emitting distress signals. These signals take the form of a bouquet of volatile chemicals, the signaling language plants use to warn neighboring plants that they also may be attacked and should defend themselves.

“What’s interesting is that predatory and parasitic insects and mites also are fluent in plant language, and the plants know this,” James explained. “The predators actually understand what the plants are saying and know there will be food and hosts available. The chemical dialogue plants produce when attacked benefits not only the plants, but the ‘bodyguards’ they recruit for protection.”

Although scientists have been studying plant-to-plant and plant-to-insect conversations for over 20 years, there are many questions that James’ team is hoping to answer. For instance, can the conversations plants have with each other and with beneficial insects be faster and louder? Can these improved conversations improve pest management efforts?

“There is no universal plant language. Different plant species seem to have their own unique languages. Grape talk is different from, say, bean talk,” James said. “However, there are some ‘words’ that appear to be fairly common amongst plant languages, so they are understood whether emitted by grapes or beans.”

James has coined the acronym HIPPO (Herbivore-Induced Plant Protection Odors) to indicate his research focus. More research is required in regard to deployment rates and methods before HIPPOs can be used optimally in practical crop pest management. However, dispensers containing HIPPOs are now available commercially, and some growers are using them with good results.