Skip to main content Skip to navigation
Posted by entomology.office | May 2, 2013 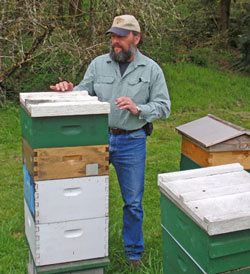 For about seven years, many Western beekeepers have been plagued by unexplained die-offs in their hives. It happened recently to Mark Emrich.

“I was doing great until about five weeks ago,” he says. “Then I came down and opened up the hives and I had five dead boxes of bees. That was a huge hit.”

He lost one third of his production on his small farm near Olympia.