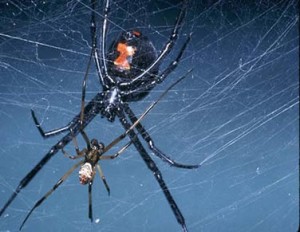 Description: Male 1/8″ (3-4 mm), female 3/8″ (8-10 mm) and black. Male’s abdomen elongate with white and red markings on sides. The female’s abdomen is almost spherical, usually with a red hourglass mark below or with 2 transverse red marks separated by black (more common in Tri-State region.  The legs of the male are much longer in proportion to his body than those of the female. Spiderlings are orange, brown, and white, gaining more black at each molt. Juvenile females often migrate away from their mothers in the spring and are scary in homes when this happens. 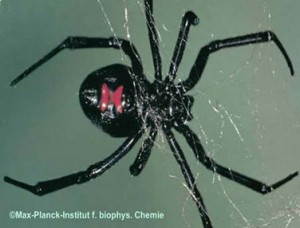 Black widow spiders feed on any insect that gets into the web, usually located in a dark, dank, site like a water meter box, or in a building crawl space. Wood piles are common sources of bites on humans where the spider bites the arms or abdomen of a person carrying wood into the house. The web is irregular with a funnel shaped retreat for the spider at one side.

The female rarely leaves web, stays close to her egg mass, biting defensively if disturbed. The male comes to the female’s web to mate, and is usually killed and eaten by the female. Some males offer a food item tied up in silk to the female to distract her. The male may escape, but mates only once and dies. The egg sac, 3/8-1/2″ (8-12 mm) wide, is pale brown to white. The female stores sperm, producing more egg sacs without mating again. Spiderlings disperse soon after hatching. Some females live more than 3 years.

The Black Widow spider often attempts to escape rather than bite, unless it is guarding an egg mass. Males do not bite. Female Black Widow spiders provide very toxic bites to humans and are a dangerous spider with a cosmopolitan distribution. They were the most common spiders in the area until the Hobo (aggressive) spider invasion began.