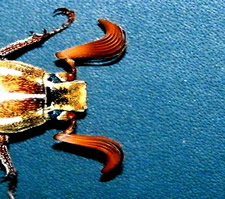 June Beetles (May beetles, July Beetles) are found in the Subfamily Melolonthinae of the Scarab family. The Ten Lined June Beetle, Polyphylla decemlineata ( Say) is very common throughout the PNW Region as a root feeding white grub which feeds on roots of crops, garden, and ornamental plants. The beetles emerge in the summer, usually in late June through July in SE Washington. They are large beetles of 22 to 28 mm size, which are attracted to lights at night and are found under the lights in the daylight. They hiss and squeal when handled. Males (see head jpg) have large feathery antennae to detect the female (whole beetle image) pheromones. 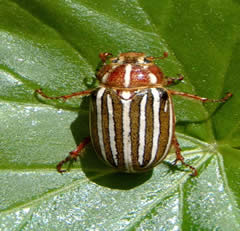 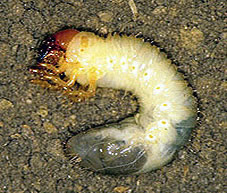