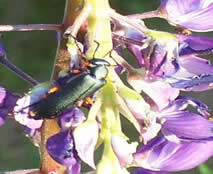 Beetles of the Coleoptera Family Meloidae are Predators of bee and grasshopper egg masses as larvae. Most are active, colorful beetles, of green, blue back, spotted, or grey. They feed on flowers, and sometimes leaves, of many plant species. Blister beetlesare called blister beetles because their fluids contain the chemical Cantharidin which is very toxic to mammals, especially horses. Horses in SER Washington are sometimes poisoned by dead blister beetles in alfalfa hay. It is very important for horse owners to buy blister beetle free hay and for alfalfa growers to avoid late cutting of blooming hay and keep their fields clean of blisters beetles. 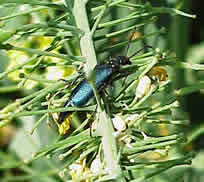 The genus Lytta (Lytta nutalli and L. versicatoria) are large green blister beetles found in the PNW and Canada. Lytta versicatoria L. is a cosmopolitan species originally from Europe which is the commercial source of Cantharidin known as the Spanish fly. L. nutalli is known from Canola in Canada.

Blister beetles are pests of home garden flowers, often damaging Iris and other showy flowers in the late spring. Since they are large chewing beetles, home garden pesticides are effective when needed. Read and follow labels.