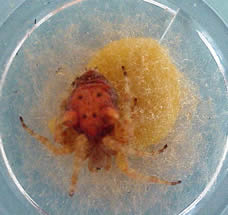 Cat face spiders show up in my lab in fair numbers during the fall and winter months as overwintering mated females which are egg bound. See the jpgs to see color differences between active feeding females in the late summer and the overwintering female. 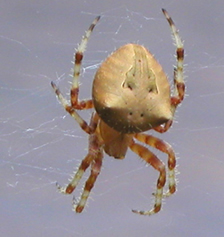 The female spider laid her eggs in the lab and died just as I was photographing her. This is a “Charlotte’s Web” scenario. The spiders lay huge egg masses in the early spring and baby spiders will quickly emerge and disperse into gardens. The mother spider will die after laying eggs as in the photo.

The young spiders do eat their brothers and sisters as they hatch so only a few of them will reach adulthood. Cat face spiders and other members of the Family Araeniidae are extremely beneficial natural enemies of many garden insects up to large insects when the spiders are mature.