The cat flea, Ctenocephalides felis is the most important flea in much of the U.S. as it can reproduce on both dogs and cats and occasionally bites humans in proximity to these pets. 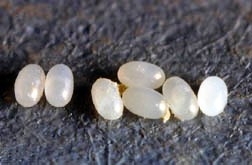 This time of the year (late spring early summer) is when pregnant dogs and cats give birth to their young. The biology of the flea was research-
ed by the famous international house of bankers and entomologists, the Rothschild’s. The adult female flea senses the buildup of pregnancy hormones in the host female. 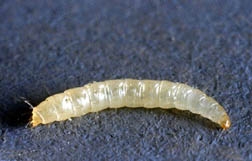 The flea synchronizes her own reproduction to that of the host mammal. Fleas eggs are laid around the area where the mammal rests and especially where the mother mammal prepares to birth her offspring. Flea larvae resemble fly larvae and are white and worm like. The flea larvae feed on feces shed by adult fleas after feeding on host blood. 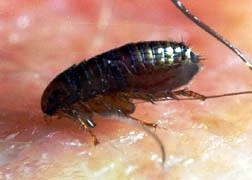 Flea larvae pupariate in silky cocoons in the substrate where the passed through their larval stages. So, young adult fleas emerge just prior to the birth of kittens or puppies in the cat flea. Large numbers of blood hungry fleas can greatly reduce the health and vigor of mother cats and dogs, and are especially hard on neonatal kittens who have insufficient nutrition.

Management can involve removing adult fleas from the immediate environment of the cats and dogs. Fortunately, we have also modern pesticides that include growth regulators that can be applied to the pets and the adult fleas are killed by feeding on pet blood. Also, the feces of intoxicated fleas can kill their larvae resulting pretty complete control.

A popular TV Ad shows a product available for dogs. Cats can be sensitive to chemicals that are for dogs.

There is a similar product for cats and neonatal kittens that most vets and animal shelters have, and  also at pet stores.

Be sure to ask for the cat product when dealing with cat fleas on cats! And do not waste time because cat fleas can transmit a protozoan blood parasite that is similar in effect to malaria in humans