English Grain Aphid, Sitobium avenae Mordvilko, is a pest aphid appearing in cereals especially wheat as grain begins to fill. Historically they have been reported as causing economic loss at 25 aphids per grain head. Newer estimates of EGA damage occur at 50 aphids per tiller before and during the milk stage of grain fill. After the soft dough stage no economic loss occurs.

The photo to the right (courtesy OSU) shows EGA and the color variations that are usually present. Some are green, some are light green, some are red, and some are almost black in the same field population.

EGA are not particularly toxic aphids to crops. Sheer numbers frighten growers into spraying for these aphids. Be sure to check for the presence of predators such as ladybird beetles, lace wings, and Nabid bugs before considering insecticide treatment. It is very rare to have a EGA population without predators feeding on it. The cost of the spray treatment will be more that the dollar cost if natural enemies are destroyed in the spray process. It is hard to pay for a spray with soft white spring wheat prices and obtain a yield increase. 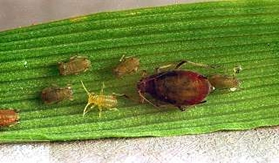 The photo at left (courtesy UI) shows Green Bug, Schizaphis graminum, (Rodani). When I arrived in Washington back in 1978, Green Bug was forecast as a major threat to wheat production. In just two years, predators and parasitoids had this species under management. They are usually found with other aphids and down under leaf sheaths or in rolled leaves.

Green Bug is very toxic to cereals, but is seldom present in large numbers anymore. They are a species confused with English Grain Aphid and Bird Cherry – Oat Aphid.