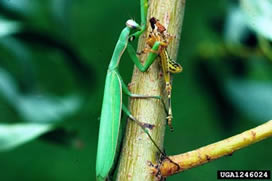 The most commonly encountered praying mantid in SE Washington and the PNW Region where winters are mild.

The European mantid is a European introduction that is now well established in the USA and in much of Washington.

These are large mantids, greater than three inches long when full grown, and come in either green or brown forms. Some brown form individuals have green edges to their wings.

Usually brown form mantids are found, and brought in for ID, because they contrast to their substrate and are attracted to lights in towns. 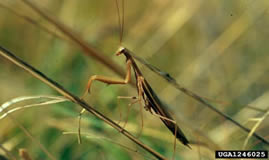 A characteristic “bull’s- eye” under the fore leg is useful for distinguishing this species. They are adapted to PNW conditions and are abundant following mild winters.

The mantids are totally harmless insects and are very beneficial as they eat other insects. Note the grasshopper in the green form photo.

Like other animals they are frequently subject to superstitious cant = they “sting”, they bite, etc. Not true.

Photos are courtesy of Whitney Cranshaw of Colorado State University.