This time of year False Wire Worm Eleodes hisperlabrus, is a frequent crosser of rural roads between harvested grain fields. Frequently this beetle, called the false wire worm, is confused with last weeks “Insect of the Week” true wire worm. 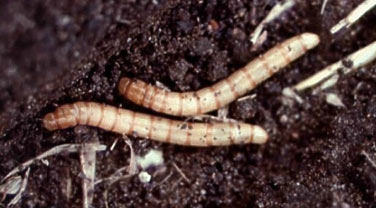 BIONOMICS The false wire worm is a beetle belonging to the Family Tenebrionidae Genus Eleodes a genus containing black beetles (Tenebrio means darkness in Latin). This species feeds on chaff, spilled grain, crowns and roots of stubble. Larvae closely resemble true wire worms, and live in the soil for long periods. Adults are easily raised on bran with pieces of apple for moisture. They are not a pest species!

MANAGEMENT There is not reason to spray these beetles as they are non-pests feeding on crop aftermath. Field mice eat the adults and their eggs and become part of a mitochondrial parasite ring. The mice also eat the oocysts produced by parasitized adult female beetle.