Minute Pirate Bug, Orius spp., are “true” bugs and occasionally bite humans, but the bite is only temporarily irritating. But many complaints come in when Pirate bugs move into home gardens and landscapes this time of year (July)
Minute Pirate Bug

Adults are very small (3 mm long), somewhat oval-shaped, and black with white wing patches. Wings extend beyond the tip of the body. Nymphs are small, wingless insects, yellow-orange to brown in color, teardrop-shaped and fast moving. Both adults and nymphs feed by sucking juices from their prey through a sharp, needle-like beak (the rostrum), which is characteristic of all true bugs.

Orius is common on many agricultural crops including, alfalfa, corn, pea, strawberry, on pasture land, in orchards, and is successfully used as a biological control agent in greenhouses. It is often found in corn silks and is most common where there are spring and summer flowering shrubs and weeds since it feeds on pollen and plant juices when prey are not available. In greenhouses, Orius spp. are generalist predators, especially on cucumber and bell pepper crops.
Minute Pirate Bug 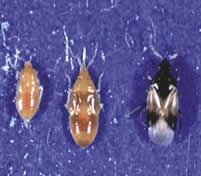 Both immature stages (nymphs) and adults feed on a variety of small prey including thrips, spider mites, insect eggs, aphids, and small caterpillars. Orius holds its prey with its front legs and inserts its beak into the host body, generally several times, until the soft body is empty and only the exoskeleton remains. It has been reported to be an important predator of the eggs and new larvae of the bollworm and of spotted tobacco aphid, but it is believed that thrips and mites are the more basic part of an Orius diet. It can also be an important predator of corn earworm eggs which are laid on the silks. Other reported prey includes eggs and small European corn borers, corn leaf aphids, potato aphids, and potato leafhopper nymphs.

Females lay tiny eggs 2-3 days after mating in plant tissues where they are not easily seen. These hatch into nymphs which develop through five nymphal stages. Egg incubation is generally 3-5 days, and development from egg to adult takes a minimum of 20 days under optimum conditions. Females lay an average of 129 eggs during their life spans, and adults live about 35 days. Several generations may occur during a growing season.