Bionomics: Most members of the Genus Limonius Eschscholtz (5 species) Coleoptera: Elateridae, have root or crown plant feeding larvae. Each species has a structure called a “signature” on the last abdominal segment. These allow simple ID of larvae when compared to a larval key. Adults are black shiny beetles that “click” when turned onto their backs, flip up and land on their feet. Other Elaterid beetles have eye spots, or are colorful. 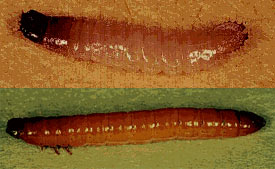 Management: Wire worm has been a pest of cereals, potatoes, and other crops since the SE Washington land was broken out of sage brush and put into cereal grain production ca. 150 years ago. Traditionally, wheat/summer fallow rotations kept wire worm damage at a minimum. The insecticide Lindane ™ was developed during the Great Golden Era of pesticide development. Lindane has been a standard seed treatment for many years. Lindane seems to be more of a repellent than a toxicant to wire worm larvae. Most cereal growers seek aphid and Hessian fly management along with wire worm management. Since 1992 much research has been done on seed treatment insecticides for management of cereal pests. Recent research trial data show efficacy for Gaucho (Imidicloprid), Cruiser (Thiomethoxam), and a new product, Chlothianidin, has efficacy at the parts per trillion levels. In 2005 winter wheat crops began to be affected by wire worm as late as February when rains brought the wire worms to the surface after a dry winter. All products at the higher rates gave good protection though the tillering stage in April. 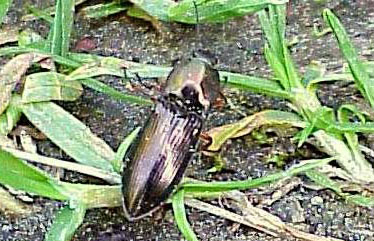